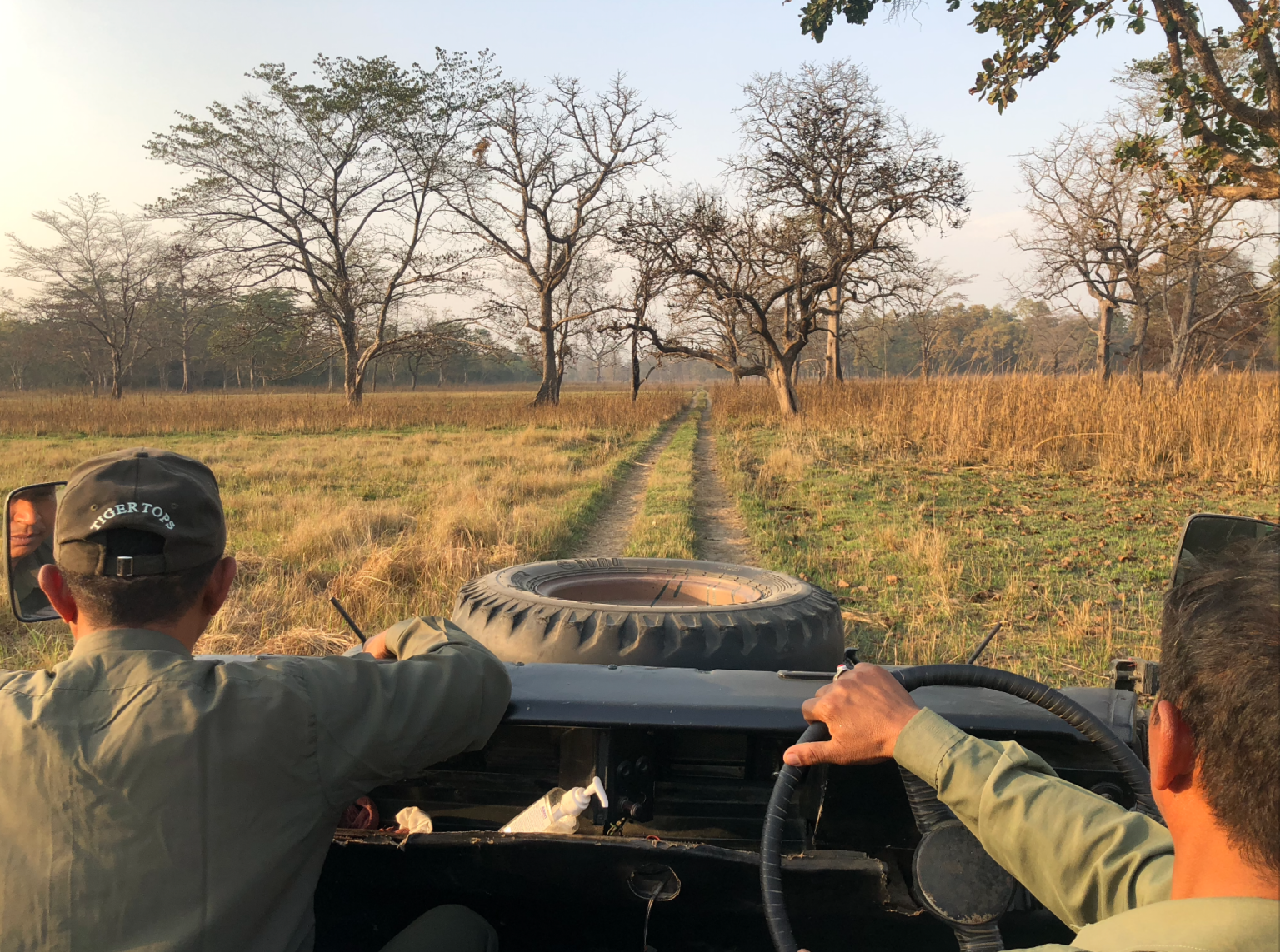 If you’re like me, you can often be stumbled upon when you’re asked the question.

“What type of traveler are you?”

The truth is, the answer to that question is just not that simple. If you are a fusion of travelers put together, then Nepal is the destination for you to explore. I’m not just biased because I live here. Still, it’s a country that practically has everything to offer from religious tourism, adventure travel, luxury travel, cultural diversity, and the rich biodiversity of nature.

While there are many epic national parks in Nepal, one of the most special parks which tourists less frequently visit is Tiger Tops Karnali Lodge on the outskirts of Bardiya national park.

It’s the largest national park in all of Nepal and the one where you’re most likely to see tigers! It is situated in Nepal’s far western region and has been operating since the early ’60s. 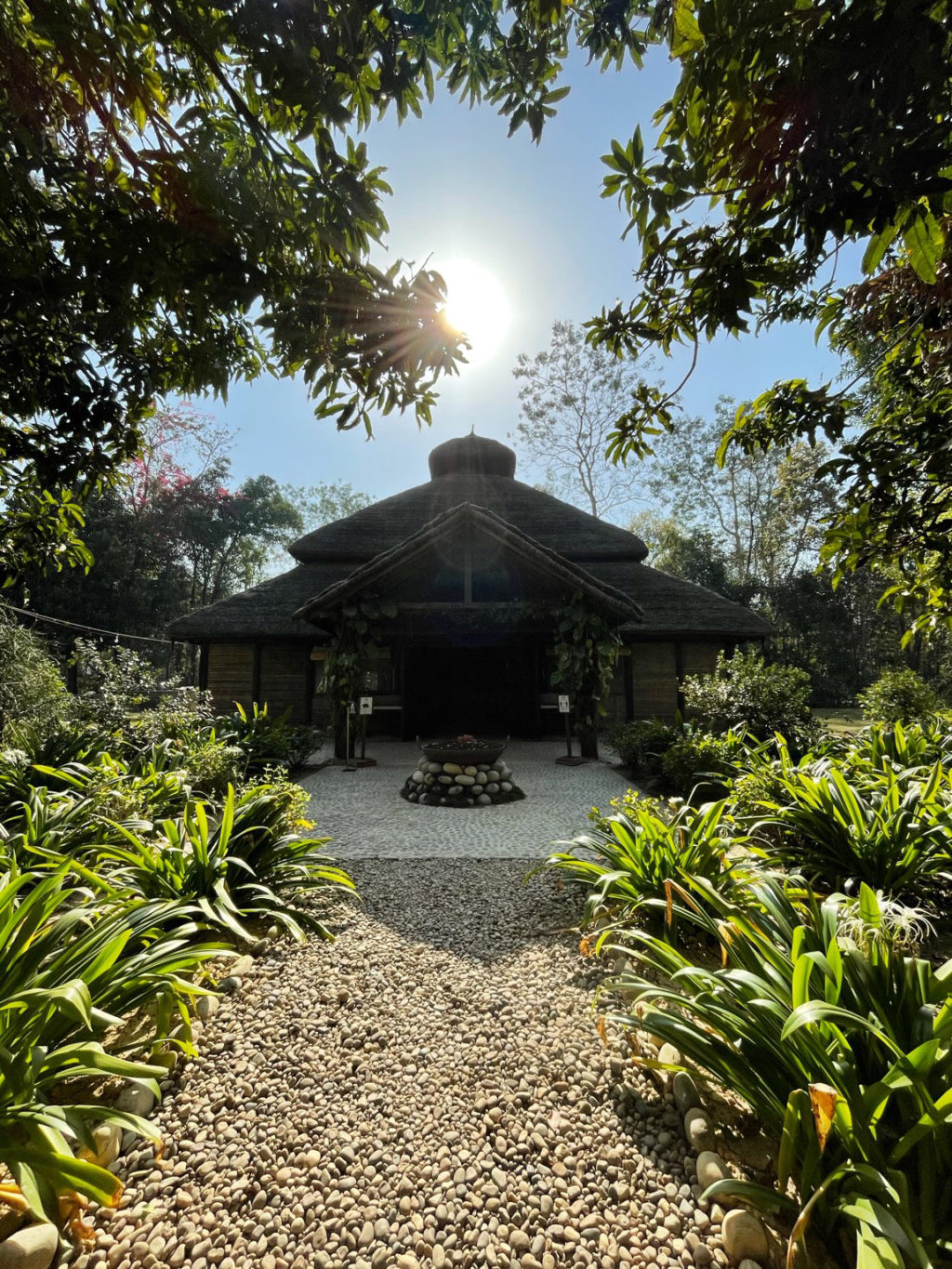 If you want to know more about the accommodation, service, and experience at Tiger Tops Karnali Lodge, scroll to the bottom of the page.

What I want to highlight is that this lodge embodies responsible tourism to the fullest. Everything you pay for goes towards sustaining the local communities and wildlife in Bardiya and its neighboring site in Chitwan.

They conduct their own conservation programs tiger monitoring projects, have their own anti-poaching network and a vulture restaurant in Chitwan. Similarly, they care for their surrounding communities by providing health care, education and promote information on conservation.

Basically, they’re not just using the sustainable or responsible buzzwords for the sake of it. They’re a company that sticks to its core beliefs and puts the environment at the center of its operations.

In February, I went on a full day jeep safari and a walking safari when I stayed there.

Instead of telling you what a typical Jeep Safari entails at Tiger Tops, let me share my experience.

My partner and I got picked up at 7am right from the premises. After having breakfast, I was greeted by a Tiger Tops team member, ranger Krishna Kumal, and our driver. 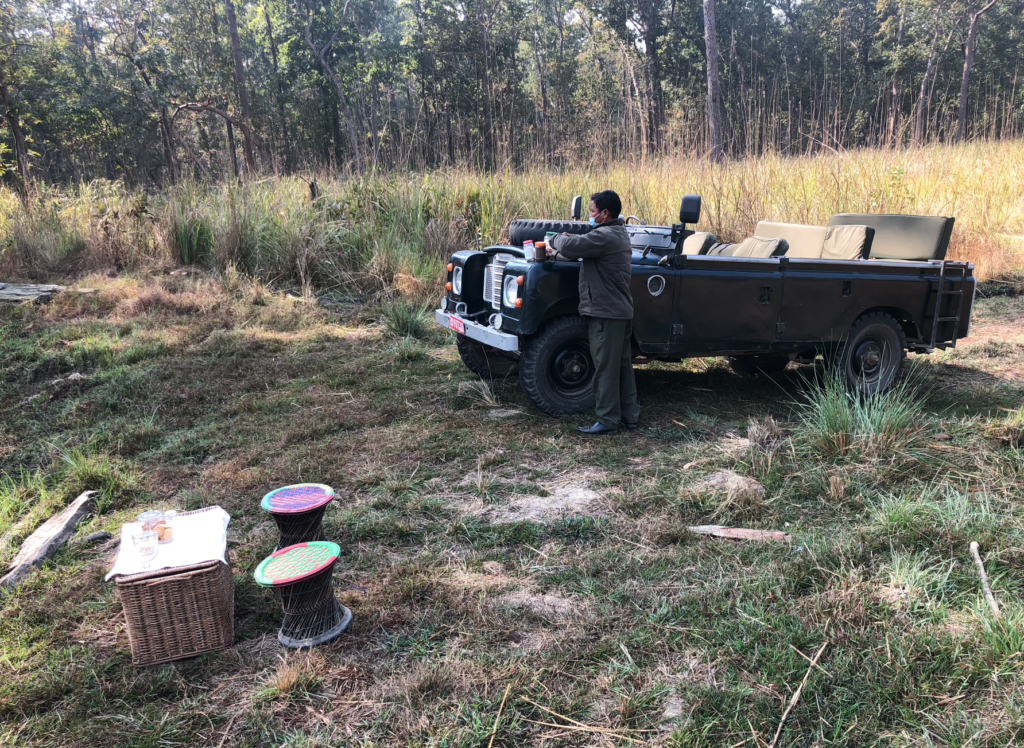 Awaiting us was this beautiful vintage land rover older than us both! We were given face masks and blankets with a hot water bottle to warm us up. What shocked me even more, was that the jeep safari was just for us; it was private!

After sitting in comfortably, we were briefed by Krishna, and the roaring engine of the landrover drove us from Tiger Tops into the checkpoint of the national park. Once all the relevant checks were done, we were off into Bardiya national park.

It wasn’t long until the vehicle came to a standstill; curious to know why I asked Krishna. Who then opened the door for us and highlighted some fresh paw prints from a male tiger.

I couldn’t believe it; there was some action already. As soon as we saw them, we went to follow them quietly. Krishna eventually led us to a riverbank, where he told us this is where they come to drink. After waiting for 20 minutes, we couldn’t find anything and retreated to the vehicle.

Many times throughout the morning, we heard and seen some beautiful birds. Krishna was eager to spot them and show us them. When he wasn’t entirely sure of the bird, he got his book out and quickly confirmed the bird we were looking at.

We stopped many times and waited for the tigers, but we did not have much luck during the morning. We could not help but be followed by other noisy visitors to Bardiya on a ‘safari’ while we were stopping.

I use this term lightly because vehicles often trailed us, which looked like converted pickup trucks with seats in the back. There would be 9 or so people sat in there, and the drivers would be wearing a baggy t-shirt, not resembling an actual ranger.

It was at this moment; I knew we had the best to offer. 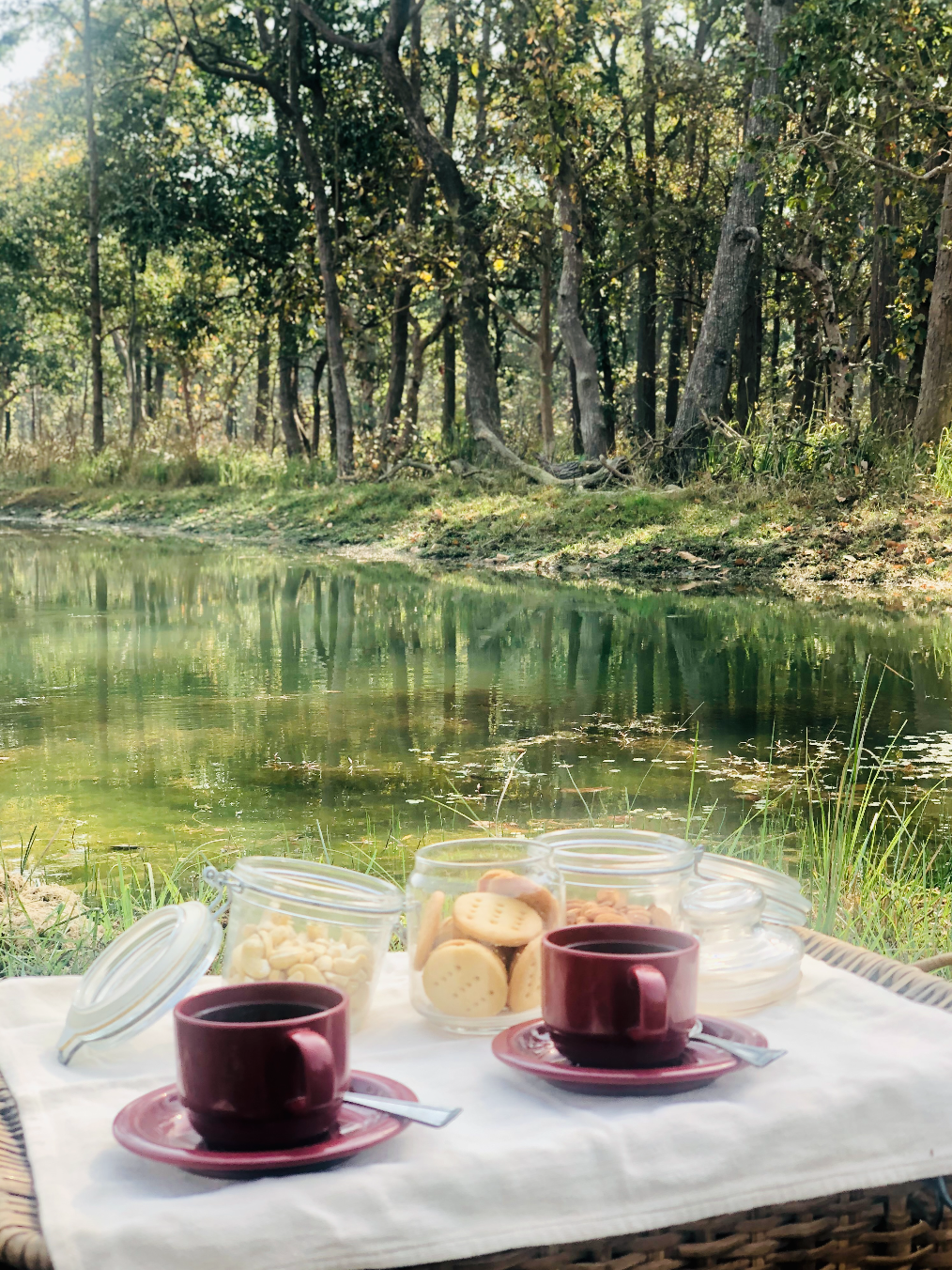 Mid-morning of the jeep safari, we stopped in a scenic area to have snacks and coffee. Krishna and our driver laid out a picnic basket, biscuits, nuts, and some organic coffee. The service they gave us made us feel like VIPs in the middle of a jungle; it was quite surreal.

Tiger Tops also prepared us a packed lunch consisting of various food, so much I had to eat later in the day. While we were eating lunch, Krishna and our driver had theirs. I even picked up how the staff had the same lunch as us, which was another indicator of how much Tiger Tops cared about their team.

We managed to see eagles dear, a rhino, and even a tiger throughout the day! Krishna also educated us about the different types of flora and fauna Bardiya had to offer. It was an educational and riveting experience.

The jeep safari came to an end with a visit to the crocodile and elephant breeding center. Where he had a look at many types of crocodiles and domesticated elephants. It was certainly an experience to remember.

But I gave it a second chance. Man, was I wrong this time.

The walking safari involved us being taken into the national park by Krishna and another Tiger Tops member. Immediately as we entered, the army asked if we were going on the ‘tiger side.’

They meant that the area was renowned for tigers that no jeeps were allowed there!

Plus, the walk was only meant to be a couple of hours, but Krishna asked if we wanted to extend it with excitement. We ended up walking for 4 hours; you could tell he loved his day job.

On the way, full of enthusiasm, he would point out male and female tiger footprints, fresh tiger poo, and rhino poo!

My heartbeat was racing; I felt like an explorer. 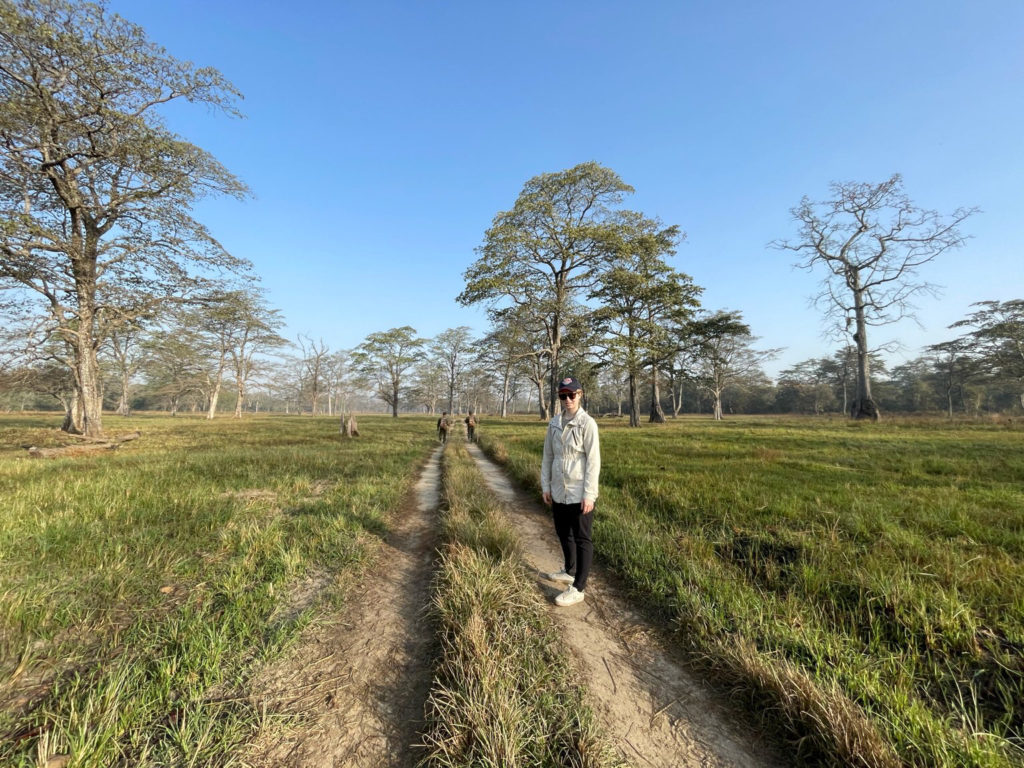 Within 45 minutes of walking, we caught a group of rangers and visitors in a tree. A ranger had spotted us and whispered, “tigers!”.

While the other visitors remained in the tree, Krishna followed and looked back at us to signal to come. The ear to ear grin on his face meant we were in for a treat.

We quietly tip toed as fast as we could to the river bank. Once at the riverbank, we were close to a tiger and two cubs! Three tigers we were witnessed right there and then at the beginning of our walk.

Around 20 minutes later, we waited, but there was no sign of them. So we started to follow the trail, but we lost them due to the noise of other visitors in the area.

Nevertheless, we were ecstatic to enjoy the scenery and see 4 tigers within the space of 24 hours. The two safaris were indeed ones to remember. The Bardiya national park safari out there.

When you stay at Karnali Lodge, most of the food and drink are included in the package. That means you get to have your accommodation, breakfast, lunch, and dinner included.

If you’re wanting something a bit more to quench your first, like alcohol or soft drinks, that’s a bit extra, but the cost is reasonable.

What I want to highlight, though, is that if you’re the type of traveler with a continental palette, then Tiger Tops Nepal will certainly not disappoint. What surprised me is that every meal covered many different cuisines from Italian, Greek, Thai, Indonesian, Vietnamese, Nepali, and many other nationalities.

They ask your dietary requirements in advance and then tailor a three-course meal for you for most mealtimes. I was pleasantly surprised when I was served hummus, chicken satay, tagliatelle, pad thai, Vietnamese spring rolls, chicken and mash potatoes, and more. 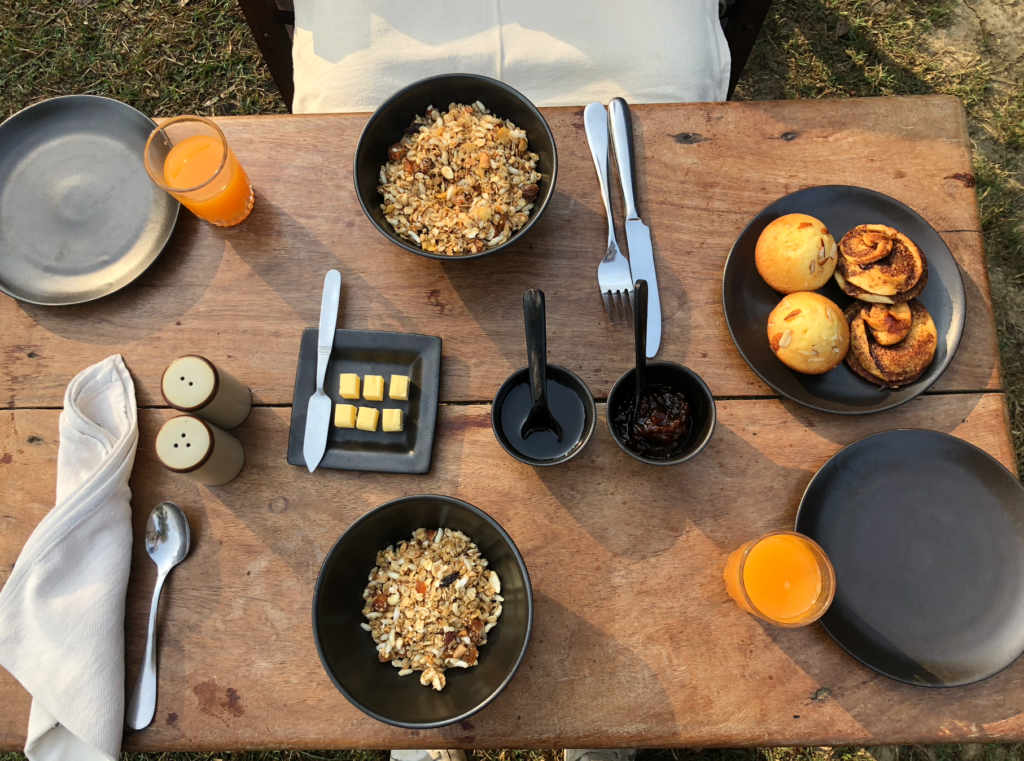 Not to mention their delicious breakfast consisting of local style muesli, eggs, muffins, fruit, curd, and coffee/tea. Plus, they even made a birthday cake for my partner’s birthday, free of charge!

The coolest thing about their food is that it’s sourced directly from their on-site organic farm! On the contrary, if you are not a fan of large portions, I’d recommend you tell them in advance.

While the food is fantastic, while I was there, they had a habit of putting lots of food on the table, and I couldn’t eat it all. Which I’m scared might have gone to food wastage; that was the only downside I could think of! 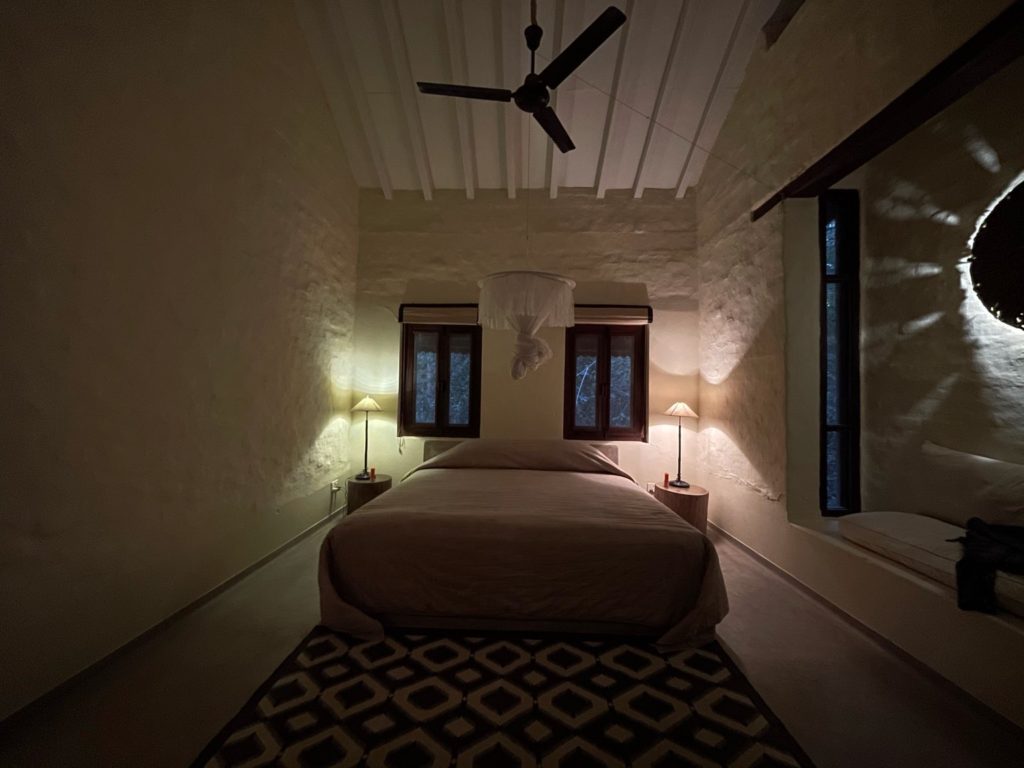 When you stay over at Karnali lodge, you get the opportunity to stay in different types of room. Because I was looking for a luxury stay for my partner’s birthday, I opted to stay in one of their traditional rooms with an attached bathroom. It was minimalistic, comfortable, and crafted from local materials.

They had running hot water, ayurvedic soaps, and toiletries! Similarly, the room had flashlights for the nighttime, odomos for the mosquitos, and hand sanitizer! It had a mosquito net for warmer weather and beautiful pulldown blinds to allow the natural light to seep in.

My favorite part, though, was by far the informative manual. Usually, a lodge or a hotel will have a manual telling you about the property’s history and activities available. But, Tiger Tops went a step further and shared with you all the different types of animals you could expect to see and hear on their property.

Which made it that extra bit exciting. 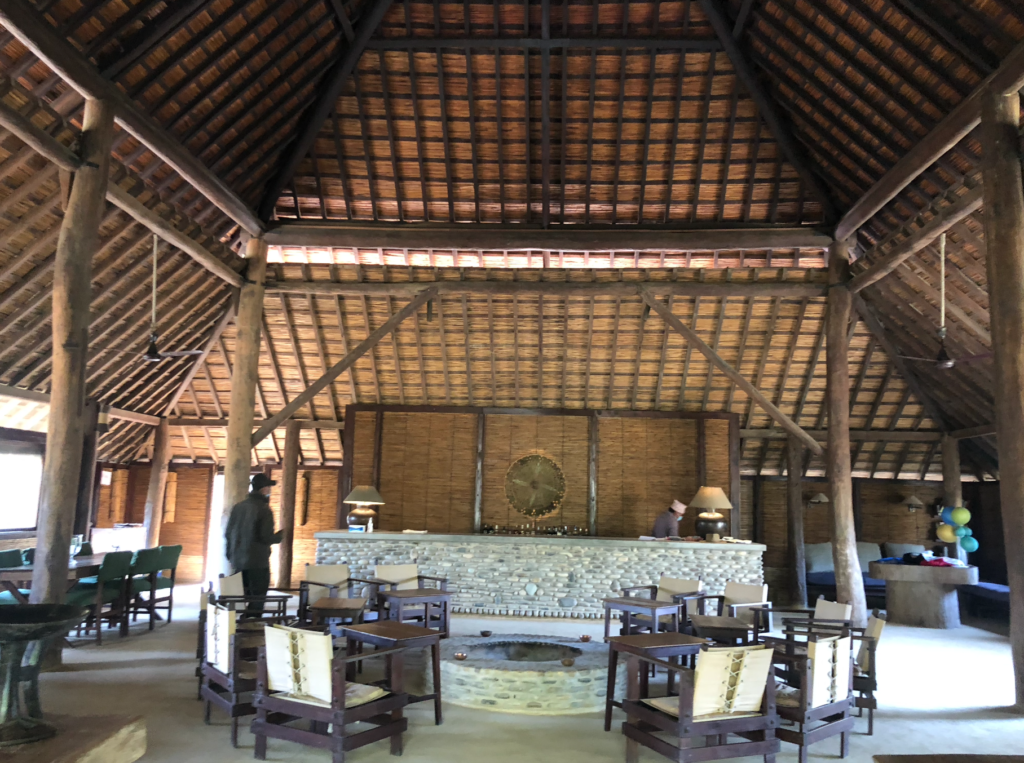 My stay in Bardiya wouldn’t be complete without the outstanding hospitality that was received. Krishna, our guide, was there at all times, in the evening and in the daytime to attend to us when required.

Many staff members were there to greet us with hot towels, lemon sodas, and masala tea. They also offered to wash our car after driving serious dirt roads leading up to Butwal. Alongside preparing a lunchbox for us to take for the car journey home.

Overall, I’d honestly say I’ve been fortunate to stay in many luxury accommodations within Nepal, and Tiger Tops Karnali Lodge is one of the best properties out there. It’s affordable, and you get more than what you’re paying for.

If you’re looking for an experience of a lifetime, then head to Bardiya and stay in Tiger Tops Karnali Lodge.

How to get to Bardiya national park

Kathmandu to Bardiya is 600km, and the nearest airport is Nepalgunj. The flight time is around 1 hour 10 minutes and then a 2 hour journey from the airport.

If you wish to travel by car from Kathmandu, it can take around 14-17 hours. If you do this, I recommend breaking the journey up as it can be tiring!

You can get an overnight public bus from Kathmandu, which takes you to Ambassa in the morning.